The SS Maheno, a shipwreck on Seventy Five Mile Beach at Fraser Island connects Australia and New Zealand with the ANZAC’s at Gallipoli.  ANZAC Day was borne out of the campaign on the Gallipoli Peninsula in 1915 when the Australian and New Zealand armed forces combined their efforts to overrun the Turkish army.

While the campaign did not achieve the intended goal the conduct of the ANZAC’s indelibly shaped the Australian and New Zealand nations.

Before her tours of duty the Maheno was owned by the Union Steamship Company of New Zealand and more significantly for 2015, it marks the centenary of the landing at Gallipoli, as it was the New Zealand Hospital Ship Maheno (NZHS Hospital Ship No 1) in WWI.

The New Zealand Hospital Ship Maheno collected both Australians and New Zealanders from ANZAC beach in 1915.  After the withdrawal from Gallipoli and for the duration of WWI the Maheno collected the wounded of all nationalities from the major battle fields of France and transported them to Britain for further care.  So many owe their lives to the dedication and efforts of the medical teams and the hospital ships including the Maheno.

The SS Maheno, launched in 1905 operated as a passenger ship primarily on the cross Tasman run between Australia and New Zealand.  The Maheno held the speed records for almost two decades.  Following the start of WWI, the Maheno was chartered by the New Zealand government and converted to be HMNZ Hospital Ship No 1.  Much of the medical equipment on board came from public appeal.  The first voyage of the Maheno as a hospital ship was from 7 July 1915 to 1 January 1916, arriving at ANZAC beach in Gallipoli for the first time on 26 August 1915.  Normal service duties resumed after the war.

On 3 July 1935 the Maheno left Sydney under tow after having being sold to a Japanese shipbreaker.  On the afternoon of 7 July while about 50 miles from the coast the towline parted during a severe cyclone.  Attempts to reattach the towline failed in the heavy seas and the Maheno with eight men aboard drifted off and disappeared.  The Oonah, the former Bass Strait ferry towing the Maheno and also destined for the Japanese shipbreaker, broadcast a radio message requesting assistance for the Maheno, whose propellers had been removed.

The ship was finally found on 10 July by an aircraft piloted by Keith Virtue beached off the coast of Fraser Island.  The crew of the Maheno set up camp onshore, waiting for the Oonah to arrive, which it eventually did on 12 July. The ship was subsequently stripped of her fittings but attempts to refloat her failed and eventually the wreck was offered for sale but found no buyers.

The SS Maheno is named after a small New Zealand community between Dunedin and Christchurch.  The original SS Maheno ship’s bell has hung at the Maheno (Primary) School in New Zealand since 1967.  The bell was removed before the ship was sold to be scrapped and retained by the former owners of the ship Union Steamship Company of New Zealand until the bell was donated to Maheno School.

And so the gallant shipwreck of the SS Maheno has been resting on the eastern beach of Fraser Island since 1935.  No doubt many have memories of its early landing and the subsequent ‘land mark’ it created.  It has been the subject of many an avid photographer with literally dozens of postcard designs having been produced over the years.

One of our facebook fans, Steve Gilbert, recalls fond childhood memories clambering over the wreck on his Fraser Island camping holidays.

“Great memories of that ship. It had 3 levels when I was a kid and we camped on the beach next to it. I knew every inch of it lol.”

Thanks Steve for your insight…what a fantastic adventure, camping AND a shipwreck, Ahoy Matey! 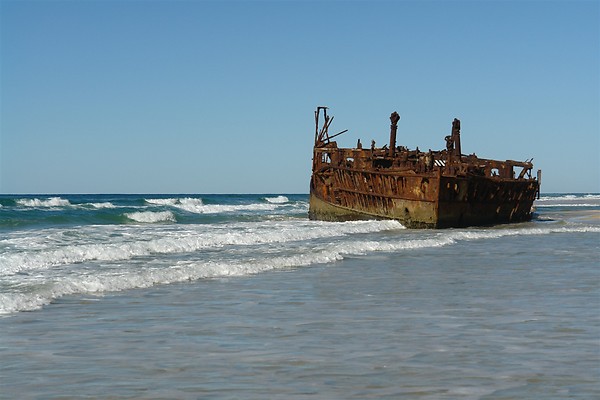 The SS Maheno – shipwrecked on Fraser Island since 1935.